Parsing is the process of discovering the syntactic structure of the program in the linear (unstructured) sequence of tokens generated by the scanner. This syntactic structure is a tree in which tokens form the leaves of the tree. Interior nodes of the tree have types, called nonterminals, that specify certain grammatical categories. In an imperative programming language we may have nonterminals for statements, expressions, declarations, etc. These nodes are created by tree-constructing functions that take trees as input that become the child trees of the created tree.

Context free grammars are the formalism that is almost universally used for specifying the syntactically valid tree structures of a language. Grammars have the form

and the following sequence of tokens, possibly produced by a scanner.

The following syntax tree is a valid “parse tree” for this sequence of tokens as the tree conforms to the restrictions placed on the grammar. 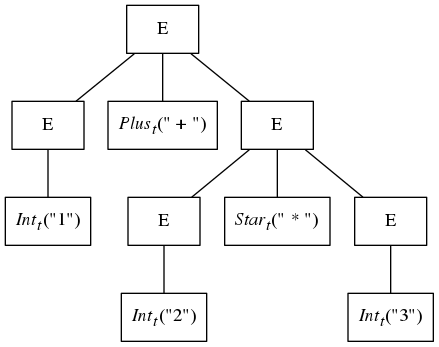 While this tree is a perfectly fine representation of the structure in the sample expression, the following tree also conforms to the grammar and can be generated from the same set of sample tokens: 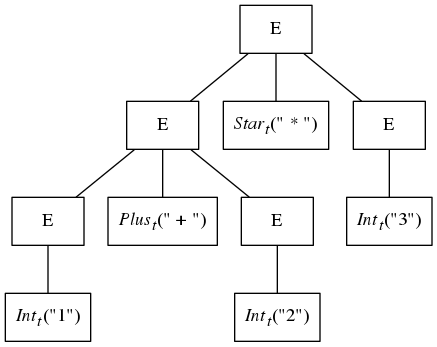 The problem is that the grammar given above is ambiguous. Such grammars have more than one tree for a given input and are thus not suited as grammars from which parsers can be built. The tree directly above has a shape that suggests that the addition will be done before the multiplication, and this violates the traditional operator precedence rules of arithmetic.

What is needed is a grammar that is non-ambiguous and enforces the rules of operator precedence and associativity. The grammar in Figure 1 satisfies these constraints and is written in the syntax of Silver. Silver syntax is somewhat different from the syntax of other parser generators. This is because it can be used in a more general manner since all of the attribute grammar specifications in Silver can be applied to concrete productions.

Semantic actions are allowed on concrete productions and are written between the curly braces. In Figure 1 these are elided.

Parser specification and use

In Main.sv the following specification specifies a parser named parse

The generated parser parse is a function that takes two strings, the text to parse and name of the file which is then used in any error messages generated by the parser. This function returns a result of type ParseResult<Root_c>. This is a parameterized nonterminal that defines three attributes:

The file Main.sv also makes use of Silver’s rather esoteric input/output constructs defined in the Running Silver Section.

Copper, like many parser generators, also supports the specification of operator precedence and associativity as annotations on terminal declarations. Examples of these types of specifications can be found in the Terminals.sv file of the tutorial grammar simple:terminals and are explained in more detail in the Silver and Copper reference manuals.

Copper generates LALR(1) parsers and context-aware scanners. Many compiler textbooks describe LALR(1) parsing and the challenges of specifying a grammar so that it falls into the LALR(1) class of grammars. When Copper reports a conflict, it is because the grammar is not LALR(1) and needs to be refactored to be in this class.

Readers that are serious about designing scanner and parsers need to read about LR parsing (which include LR(1) and LALR(1) parsing) to understand the underlying parsing algorithms.